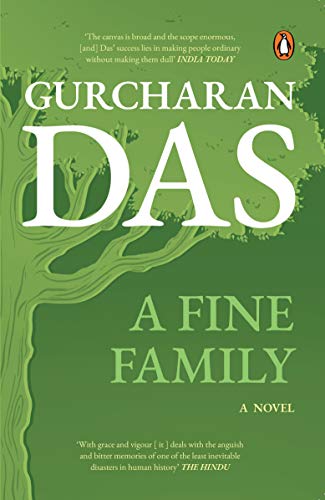 Not ready to buy yet ?

9 people have added this product to Wishlist.

A Fine Family: A Novel - Gurcharan Das details from flipkart

Published in 2000, A Fine Family: A Novel is a book that traces the life of three generations of Indians who have grown along with their ever-evolving country.

Summary Of The Book

A Fine Family: A Novel is a book that talks about the changes a family goes through from India’s pre-independence period to modern-day India. This book starts with the story of Bauji, a highly successful lawyer. He works in Lyallpur and cherishes his family life. The first part of the story is set during the time when India was on the verge of becoming an independent nation. The readers are provided with insights into the manner in which the people of those times were affected by the negotiations among the leaders. This story also talks about how Bauji lost one of his daughters during the riots of the Partition. As a result of the violence that led to widespread bloodshed, many people were left fuming silently with burning questions about the Partition. These questions remain unanswered till date.

The second part of the story revolves around Tara, who is Bauji’s daughter, and her family. Here, the author describes a generation that desires to acquire the positions left vacant because of the departure of the British. The distance between Tara and her husband, Sewa Ram, seems to increase by the day as her approach to life is completely different from his.

The third story in this book is about Tara’s son, who desires to reach greater heights. He sets foot in the city of dreams, Mumbai, to explore the opportunities that life has to offer. A Fine Family: A Novel depicts how humans, despite all odds, push themselves to live their dreams.

The author of this book, Gurcharan Das, is also a renowned commentator and an intellectual from Punjab, India.

Apart from this book, Das has published a number of other books such as The Difficulty Of Being Good: On The Subtle Art Of Dharma, India Grows At Night: A Liberal Case For A Strong State, India Unbound From Independence To The Global Information Age, and The East India Company: The World’s Most Powerful Corporation.

Das was born on the 3rd of October 1943, in Punjab, India. He completed his schooling in Washington D.C., where he moved due to his father’s transferable job. He completed his Bachelor’s degree from Harvard University in Philosophy and completed his thesis under John Rawls. He then joined Harvard Business School’s Advanced Management Program. Das served as the CEO of Procter & Gamble India, and pursued his career as a full-time writer after retirement. He also served as the Managing Director and Chairman at Richardson Hindustan Limited from the year 1981 to 1985. Presently, he writes for publications such as Financial Times, The New York Times, and The Wall Street Journal. Gurcharan Das currently resides in New Delhi, along with his spouse.

A Fine Family: A Novel - Gurcharan Das reviews and comments: